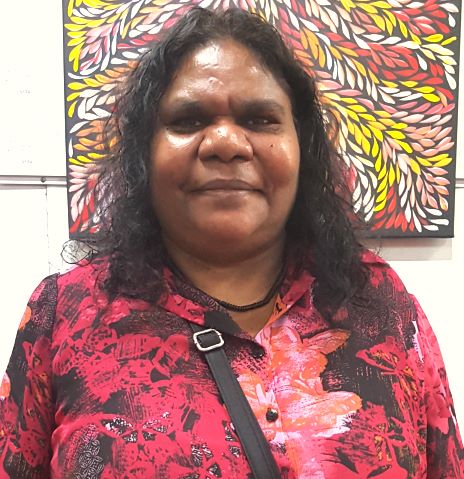 
Rachel was born in Ali Curung (formerly known as Warrabri) in 1967. Ali Curung is situated in the Northern Territory of Australia and is approximately 1100 km south of Darwin, the capital city of the Northern Territory. Rachel is from the Kaiditji/Anmatjerre tribes of central Australia. Her father was from the Kaiditji/Anmatjerre tribes and she can speak Kaiditji and Eastern Warlpiri and understands Anmatjerre. Rachel's father's Dreaming is the Rain Dreaming from the country called Walabunnba (north west of Alice Springs near Anningie Station).

Rachel started painting in the late 80's. She would watch her mother and the elders paint Dreamings. She began to experiment with painting and would attend the women's centre with other women to paint. Rachel enjoyed the experience of painting and developing her own style. Rachel's quality and style of painting began to attract attention by the manager of the women's centre. Soon Rachel's paintings were being displayed and brought by people visiting the community and through other local galleries. Rachel moved with her young daughter, Marissa, to Darwin in 1993 were she continued to produce artwork. Her quality and style began to be noticed by a number of art dealers in Darwin and she soon found her work in demand.

Through her father Rachel is able to paint the Rain Dreaming. From her mother's side of the family she can paint Bush Bean (Wakalpirri), Bush Tomato (Yakatjirri). Each dreaming is reproduced in different styles. Rachel has paintings displayed with Aboriginal Fine Art Gallery, Darwin, NT and her paintings have been displayed Nationally and Internationally.